I am migrating this blog to Tumblr (http://scdgirl.tumblr.com). Stay tuned. :) 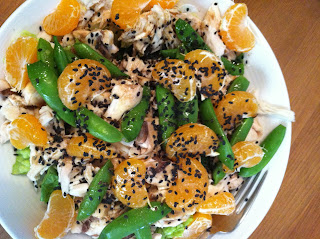 There are a few different SCD-legal types of vanilla extract out there, and I thought I'd share something I discovered recently.

I was using Flavorganics vanilla most of the time when I could find it. However, when the grocery store seemed perpetually out of stock, I got frustrated and tried Simply Organic Pure Vanilla extract.

There is NO CONTEST, you guys. The Simply Organic vanilla is MUCH stronger than the Flavorganics variety. In fact, I had to cut the amount of vanilla I was using in our ice cream recipe from 1 tablespoon to 1 teaspoon!

So, if you're looking to save some cash, go for the Simply Organic. And no, they didn't give me any for free to say any of this. I bought it all fair and square. LOL.
Posted by Unknown at 10:10 PM 1 comment:

Email ThisBlogThis!Share to TwitterShare to FacebookShare to Pinterest
Labels: recipes

So I was on Twitter (as I generally am these days), and I saw an article from @thesohospeaks which was retweeted by someone I follow.

Before I go any further, I just want to say that I agree very much with the spirit of this article. When you eat properly and you eat well, it is nothing to be embarrassed about. Food is meant to be enjoyed, and even though my son and I have multiple food intolerances, we still enjoy food very much.

However, I had to take issue with the following portion:

“Before I serve up my opinions on food, allow me a caveat. This blog is all about healthy women, healthy body image, healthy confidence and healthy sexuality. Eating is part of this. Do I judge habitual overeating? Yes, but not nearly as much as a pervasive culture of under-eating, food guilt, fictional allergies and intolerances, calorie counting and diet-of-the-moment mentionitis.”

You can guess what part I took issue with.

OK, now before I get into what I think the real problem is, I totally understand what she was trying to do here. She’s saying, “Hey, I know some people have actual allergies and intolerances – I’m just talking about those annoying people who lie about it!”

But see, that’s a problem, and here’s why – you’re introducing the possibility that some people ARE lying about it.

Food allergies and intolerances are very tricky medically speaking. You may have a very bad reaction to a food and NEVER test allergic to it. Technically speaking you are NOT allergic. But it’s a little easier to say “I’m allergic” than to say, “Well, see, if I eat that, I won’t die, but I’ll pretty much wish I was dead by the reaction I’ll have.”

So. What’s the solution to these dietary poseurs who are allegedly out there? Instead of putting the idea into people’s head that people who claim allergies and intolerances are drama queens, we should just, I don’t know, take it REALLY SERIOUSLY.

See, if people truly understood allergies and intolerances, they would understand that it’s nothing to joke about. For someone who is truly allergic to a common ingredient, the chances are you’re not going to find them in ANY restaurant. Risking death is kind of not fun.

So in fact you have a HUGE gray area of people who have some degree of allergy or intolerance – not life threatening, perhaps, but not minor enough to be cavalier about it.

Yes, I get it that some people are really annoying and claim that eating red meat will mess up their chi or something. But the VAST MAJORITY of people are not lying. And lumping them together like this makes people with allergies and intolerances look like whiny overprivileged snobs – when all they’re trying to do is have a meal out like a normal person that doesn’t end with endless trips to the restroom.

I guarantee you if you are a person who has intolerances and/or allergies, you will have to ask a lot of questions that will seem incredibly annoying and prima donna-ish to the average person. If you’re allergic to shellfish, for example, you may need to ask if a steak is grilled on the same grill the shrimp is grilled on. This is not a prima donna question. It is NECESSARY to prevent a possibly life-threatening situation. And you can bet it’s probably a special occasion and that this person doesn’t venture out all too often, so they’d rather not end up in the emergency room at the end of the night.

So let’s stop mentioning “fictional” in the same breath as allergies and intolerances. Yes, maybe some people DO lie.

But I don’t think it’s the kind of judgment you’d want to bet someone’s life on.
Posted by Unknown at 3:36 PM 6 comments:

We all make mistakes

Last night, my son wanted pizza, and I checked the refrigerator, expecting my bag of Trader Joe's almond meal to be there, and it just wasn't.

Confused, I searched the pantry, figuring a bag MUST be there, since I tend to buy almond meal whenever I don't need it, and thus I usually have at least two, sometimes three bags hanging around.

When it became clear that there was, in fact, no almond meal, I wasn't entirely sure what to do. My son suggested I tried almond butter. I thought this was a fine idea, and made my recipe (which is not even a recipe; I've never written it down although I should) basically the same way I always do.

I spread out the almond butter mixture and cooked it for the same amount of time I usually cook my pizza crust, then added the tomato sauce and sliced goat cheese.

Somewhere during this time my son was very disrespectful and lost his dinner pizza privileges.

This was just as well, because also during this time, I took out the pizza, cut it up, and tried to eat some.

I think I knew before I took a bite, but I did it anyway. It tasted... terrible.

It was raw in the middle, oddly sweet (why almond BUTTER has some kind of sweetness but the almond MEAL doesn't seem to, I'm really not sure), and just... gross.

I threw out most of it, and was happy that I am at a point in my life where I can do such a thing without feeling madly guilty about wasting expensive food.

THEN I realized that I'd forgotten to cook the ten pounds of chicken I bought, way too late for me too cook it, have it cool, and then put it away.

So my son had canned salmon for breakfast the next day, since we were out of pretty much everything except the food we send with him for lunch.

Hi everyone. I know I haven't posted in a while. My husband and I have been writing a LOT and I am losing my mind.

Seriously, I was thinking to myself, "Oh, I don't have to cook tonight." Except that I do. The raw chicken in the fridge still happens to be there. It did not magically cook itself and shred itself into neat Tupperware containers. I made pork roast yesterday and that was fine, but pork roast is not chicken.

Trader Joe's has started carrying a sliced goat cheese. Or they've carried it for a while, and I never saw it before. Whatever, it's SCD legal!!

It does have egg in it for some reason, so if you're not able to have egg, then you'll have to stay away.

Ingredients: Pasteurized goat's milk, salt, starter culture (does not specify if cow dairy starter or not so if you are sensitive, please use common sense), microbial rennet, lysozome (enzyme from egg white).

ETA: Reader Natalie asked me a few more questions as to how I can be sure this cheese is legal. Here's what I told her:

The key is in the starter culture and in the carb count.

The back of the cheese package lists 0 grams of carbohydrates per serving and the ingredients list rennet and starter cultures. Both are used in aged cheeses (even if they aren't aged for a very long time -- the goat cheddar I use is only aged about three months). Unaged illegal cheeses are very soft and don't really hold a shape when sliced -- like ricotta or mozzarella.

This packaged cheese is a firm cheese that is sliced. This is another clue that tells you it is an aged cheese.

Since this is packaged as "Dutch" cheese it is likely a type of gouda or edam. Both are legal. 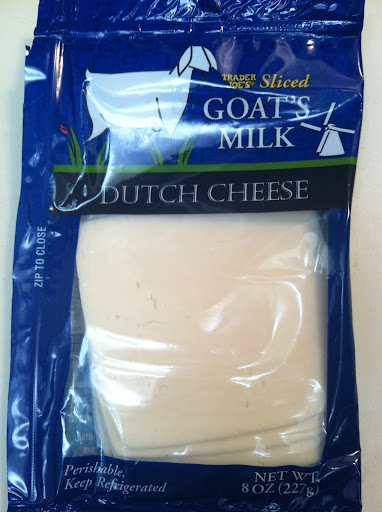